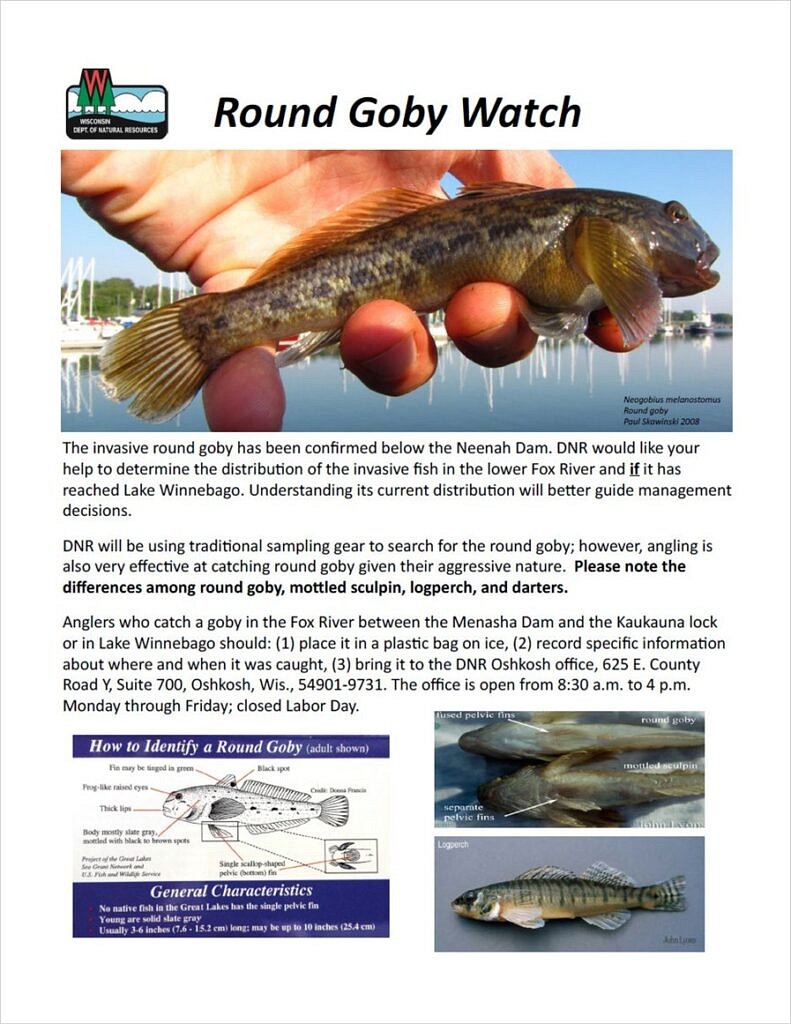 (Based on an update that Rob McLennan, DNR East District Water Resources Field Supervisor, gave to the Board of the Winnebago Lakes Council on 9.30.15 as reported by Ellen Balthazor.)

Before Labor Day (September 3?) Fisherman found one in the Fox River below Neenah Dam in what is known as Little Lake Butte des Morts; fisherman sent pic to DNR but didn’t keep the fish.

DNR staff used two shocking methods in area but didn’t find any; one method was shocking off a barge; later in same area kid caught one and DNR verified. Then DNR asked FRNSA to close the lock.

DNR set traps baited with liver and used some kind of nets –didn’t find anything. DNR recruited 13 fishermen to use worm and line from the shoreline. Caught 2 of ‘em in 20 minutes but nothing above the dam. There was one credible report from a retired naturalist about catching one off the Trestle Trail Bridge. DNR thinks there is a disbursed population in Little Lake Butte des Morts. They haven’t found any in Lake Winnebago. They haven’t used EDNA sampling in Winnebago—gives too many false positives.

The DNR said gobies would not have entered through the barrier at Rapide Croche. Gobies might have been used as bait in the Little Lake Butte des Morts area. They base this on the fact that, although it is illegal to do so, Great Lakes fishermen sometimes use gobies as bait because small mouth bass like them.

Thursday, October 1: (Expected timeline) Boats needing to get through the Menasha lock to get to winter storage were locked through on Thursday afternoon. Rotonone, a piscicide that interferes with fish getting oxygen, was used to poison any that might be in the lock on Thursday. Boaters had to leave their boats in the lock for about 4 hours. A check was made to see if fish were dead. The thinking was that a few blue gill and carp might be killed in the process. The poison residue in the closed lock was expected to degrade in 4-5 days.

What happens now? If gobies are in Lake Winnebago, there would be no reason to keep the Menasha lock closed. The DNR and FRNSA expect to get stakeholders together this winter, but at this point it is not clear who will be making the decision about future actions. No one knows what the impact of gobies will be if they are in or get into the Winnebago system. They like to migrate upstream so there is a concern about the sturgeon population. What is known is that gobies have a voracious appetite for nest eggs and that they spawn multiple times during a season. Also, in the Great Lakes native fish populations have declined in certain areas where gobies are found. However, Rob McLennon of the DNR said he remains very concerned–maybe even more concerned–about sea lamprey getting into the Winnebago system.

How did the round goby get here?

Why are round gobies a problem?

How do we control round gobies?