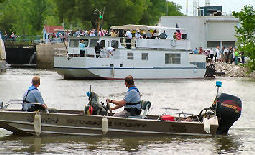 Some photos from the event: 7C’s turning around below Lock #2. 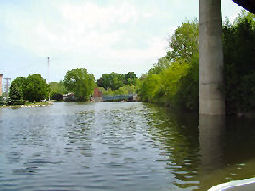 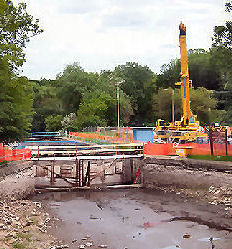 The Appleton lock #3 downstream of the Lawe St. bridge is getting site prep work done. The canal is dewatered between lock #3 and lock #1. 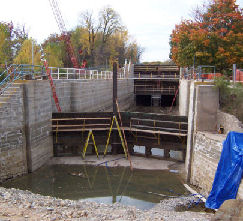 KAUKAUNA — Restoration of four locks on the Fox River through Appleton is slated to get under way in February.

Details of the restoration contract of the 17-lock system between Menasha and Green Bay are expected to be finalized this month, but the work is expected to cost between $1.6 million and $2 million, said Harlan Kiesow, chief executive officer for the Fox River Navigational System Authority.

“We’ve developed a timetable for reconstruction of the locks in three phases with the four locks in Appleton being the first phase,” Kiesow said.

Kiesow said work on the Appleton locks will begin as soon as a contract is drawn up and will start with rebuilding the lock gates, which are constructed of wood timbers and metal mechanical parts.

“The gates will be pulled in February and measurements made to get new mechanical parts machined,” Kiesow said.

Later in the spring, the canal system in Appleton will be drained so concrete and masonry work can begin.

Kiesow said work on the Appleton locks will be completed in about one year.

After years of negotiations the locks were turned over from federal control to the state, which subsequently leased the locks to the authority, a state-appointed group of citizens responsible for overseeing restoration and operation of the locks or making the decision to close the system.

Appleton Mayor Tim Hanna said he is pleased that restoration is about to get under way in Appleton.

The authority on Dec. 14 selected Oshkosh-based C.R. Meyer Construction as the design and building contractor for the first phase of restoration.

Timing of the second and third phases of lock reconstruction will depend on funding availability.

A local river advocacy group, Friends of the Fox, is in the midst of a campaign to privately raise $2.8 million that will trigger $2.8 million in matching state funds and an additional $5.6 million in federal funds.

“The whole restoration project is based on fund availability,” said Bob Stark, Friends of the Fox president. “Currently we are at $2.1 million. We have 17 formal requests out and are expecting responses in the first quarter of 2006 from individuals and businesses.”

Overall, Friends of the Fox wants to raise $6 million to speed up the timeline to restore all the locks from 12 years to four years. 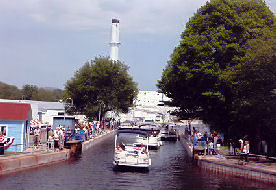 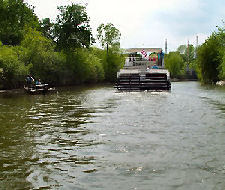 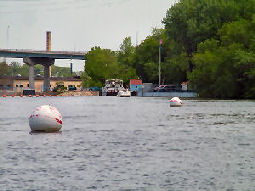 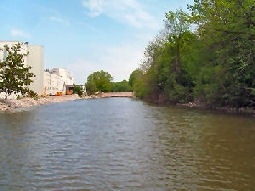 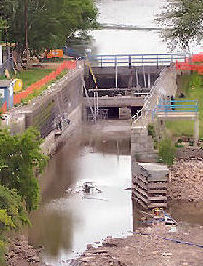 The Appleton #1 lock has it’s downstream doors removed and the mortar is being repaired between the large cut stone blocks on the sidewalls. (closeup) The navigation canal is dewatered. 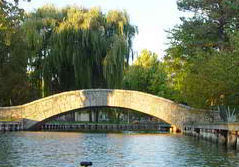 NEENAH — The renovation of the historic Whiting Boathouse on Doty Island will begin this month, and the construction of a pavilion at Memorial Park will follow this spring or summer.

The Common Council on Wednesday unanimously awarded the boathouse renovation to IEI General Contractors Inc. of De Pere for $176,000 and the pavilion project to Milbach Construction Services Co. of Appleton for $291,000.

Both were low bids and within budget.

The boathouse, 515 Clark St., is Neenah’s most popular rented facility. It was built in 1932 by paper manufacturer Frank Whiting and has been under the control of the Park and Recreation Department since the early 1970s.

“It is used for weddings, picnics, retirement parties and company Christmas gatherings,” said Parks and Recreation Director Eileen McCoy. “Pretty much every weekend it is rented, and many weekdays, too.”

The renovation of the boathouse will occur during February, March and early April.

The project will make the building handicapped accessible and will include renovated restrooms, new windows, a new entrance, a new heating system, air conditioning, a gas log for the fireplace and a patio.

McCoy said the new windows will mimic the appearance of the old windows.

“We are sensitive to the fact that it is a local historical building,” she said.

The boathouse is eligible for the Neenah Register of Historic Places, but assistant city planner Carol Kasimor said there has been no push to add the landmark to the register.

“The Landmarks Commission would have to review putting it on the register,” Kasimor said. “They just haven’t considered it yet.”

The new pavilion at Memorial Park will be built at the south end near the sled hill and skating rink.

The 3,000-square-foot building will include a large meeting room with a fireplace, a kitchenette with a serving window, a small meeting room for use as a warming shelter, and restrooms.

“It will have a similar appearance to the existing shelter” at the north end of the park, McCoy said. 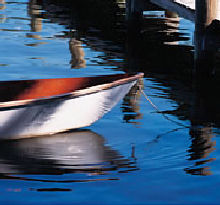 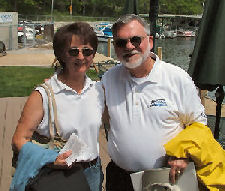 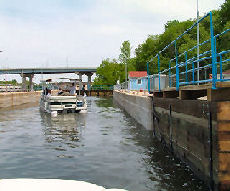 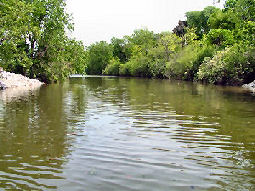 Very nice views on the trip to Lock #2 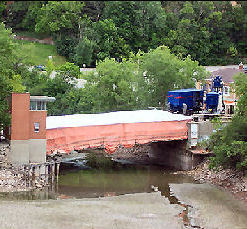 The Old Oneida St. bridge is being sandblasted and painted. 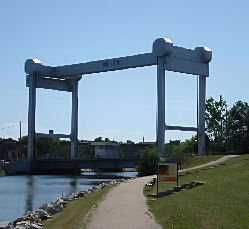 “We all know how important these lift bridges are, not only to boaters, but to the local economy along this outstanding recreational resource,” Governor Doyle said. “We have reached the point where all parties can come to an agreement that will keep the Fox River lift bridges operating as they have in the past.”

A tight budget had threatened to force the Wisconsin Department of Transportation to curtail operating a series of seven lift bridges in Menasha, Oshkosh, and Winneconne along the Fox River. However, meetings among local officials, Governor Doyle’s office, Senator Roessler, Representative Kaufert, and the Wisconsin Department of Transportation resulted in formulation of a plan that will provide the funding to keep the bridges open this year.

“I appreciate the Governor recognizing the importance of the lift bridges to the Fox Valley area,” Representative Kaufert said. “By keeping these bridges open for the 2005 boating season, we will maintain our commitment to the boating community and more importantly, garner the economic benefits it provides to the area.”

“Keeping the bridges operational is necessary to the local economies, boaters, tourists, and businesses,” Senator Roessler said. “I’m pleased that our bipartisan efforts will retain this critical bridge and waterway accessibility.”

DOT officials had anticipated a $428,000 shortfall in the funding needed to keep the lift bridges, two in Menasha, four in Oshkosh, and one in Winneconne, operating on a normal schedule and had suggested curtailing the operating schedule to maintain its budget. Local concerns about the curtailed schedule led to public meetings and, later, negotiations involving Governor Doyle, DOT, Senator Roessler, and Representative Kaufert to develop a plan to keep the lift bridges operating.

MORE –
In early January, Governor Doyle, Representative Kaufert, Senator Roessler, Department of Administration Secretary Marc Marotta, and DOT Secretary Frank Busalacchi sent a letter to the U.S. Coast Guard on a separate, but related, issue. The letter requested that the Coast Guard reverse its decision to stop regulating bridges over the Fox and Wolf Rivers. The request was made to ensure that area railroad lift bridges operate on the same schedule as the state lift bridges. The state has no authority to require the railroads to operate their lift bridges. Without the Coast Guard maintaining regulation, the railroads would be free to operate their lift bridges on whatever schedule they determined.

The Coast Guard will likely issue a response to this request shortly, but regardless of Coast Guard action, Governor Doyle, Representative Kaufert, and Senator Roessler remain dedicated to finding solutions that maintain the customary operating schedules and seasons for the state-owned lift bridges in Winnebago County. A short-term solution has been found for the 2005 season. Meanwhile, the Governor and legislators will continue to work together on a long-term solution.

APPLETON, Wis. – A $250,000 grant from the Fox Cities Convention and Visitors Bureau has given restoration of the historic Fox River locks both an important financial boost and recognition of its value to tourism.

“The Fox Cities Convention and Visitors Bureau’s $250,000 grant is the best endorsement we could have,” said Wally Bergstrom, an organizer of a fund-raising effort led by the nonprofit group Friends of the Fox. “These folks really know what’s good for tourism and work hard to improve quality-of-life issues.”

“The Fox Cities Convention and Visitors Bureau has long believed that the Fox River offers untapped tourism potential,” Executive Director Lynn Peters said. “The locks themselves offer great opportunities for visitors, but we also expect them to be a catalyst for future waterfront development. We’re excited to be able to make this contribution to the project.”

The $250,000 grant was awarded to the Fox River Navigational System Authority following approval by the Bureau’s Capital Development Committee and Board of Directors and endorsement by the Grand Chute Town Board last month. The grants are funded by a room tax at Fox Cities hotels and motels.

The state-appointed FRNSA is overseeing restoration of the locks, financed by a combination of federal and state money and local contributions. Friends of the Fox launched a campaign in May 2005 to raise $6.25 million in contributions to speed up the reconstruction, so the full 39-mile navigational system can be operating by 2009. Sixteen of the 17 hand-operated locks will be put back into service. A boatlift will be added downriver of Kaukauna at the Rapide Croche lock, which remains closed as a barrier to lamprey eels and other invasive species.

“The donation of the Fox Cities Convention and Visitors Bureau is a wonderful example of the public-private partnership. Their generosity will help us in reclaiming the rich history of the Fox River Navigational System,” Ron Van De Hey, FRNSA chairman, said.

That history covers a wide range of activities beyond boating through the locks.

“I think this grant by the Fox Cities Visitors and Convention Bureau approved by the Town of Grand Chute demonstrates that these groups understand the viability and importance of this project to the future benefit of Fox Valley residents,” Robert Stark, Friends of the Fox president and FRNSA vice chairman, said. “It’s not just about the boating, it is about everything that we hold dear – family, education, environment, heritage – our very way of life. The economic benefit will be ongoing. Their $250,000 grant shows vision and forward thinking.”

The project got under way with preservation work on the Kaukauna locks in September and continues with restoration of the four Appleton locks. Contractor C.R. Meyer Construction of Oshkosh is to complete that work this year.